The Pros and Cons of Open Data

Open data is an increasingly important topic in MERL. Many MERL practitioners advocate for open data given the benefits of sharing data that others can use to analyze, reanalyze and draw new and beneficial conclusions. However, making data open does not come without risks and could result in unintended consequences. The following guide outlines some of the pros and cons of open data and things to consider when making your data open. Table 1 includes a summary of key points.

One of the overarching benefits of open data is accessibility. Data collection and cleaning can be expensive, and many projects or organizations are limited in their capacity to collect and manage large amounts of data. Making data open increases the number of datasets available for others to analyze and draw conclusions. This can result in:

Open data has the potential to build a community around the data; bringing people together who are working on similar issues who can exchange ideas, findings and discuss challenges. This can encourage data collaboration rather than competitiveness. 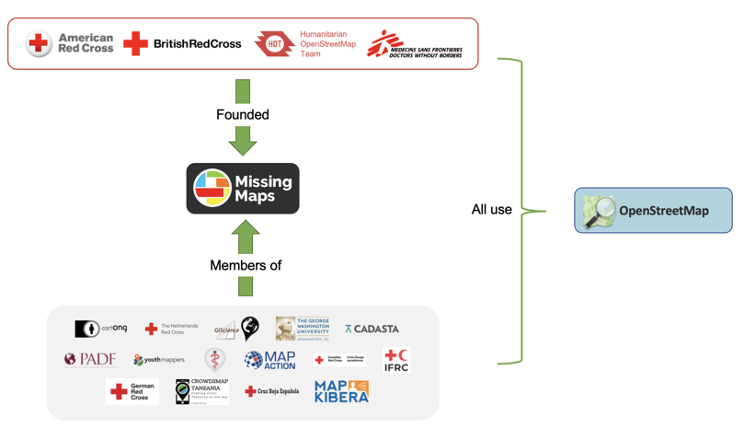 Access to open data . Open data can be used to enhance data that is already at the disposal of organizations and companies of all sizes, particularly small companies who can benefit from data already available. Open data can also reduce the chance of duplication in data collection efforts, thus saving time and money for organizations. One widely known source of demographic information is Census data, which is accessible and freely available in the United States by visiting data.census.gov. Individuals and organizations can easily tap into this data source in order to save resources otherwise used for primary data collection. For example, one could use Census data instead of designing and implementing their own household survey in the United States. Census data can be used as a baseline for programs as part of monitoring & evaluation, reducing costs for both the program stakeholders and the donor.

Because open data is offered without a monetary barrier, more people have access to it and can explore new methods of analysis, which can further the field of study or contribute to programmatic advancements, encouraging innovation and progress.

Open data can also lead to increased transparency. Since open data is freely and publicly available, it lowers the barrier for the general public (and specific stakeholders) to understand the topic or issue the data addresses. Having the data at hand also empowers stakeholders to act on the data, advocating for themselves and their community.

With increased transparency comes increased accountability and less corruption. This has been accomplished through government anti-corruption/open data policies. Open data strengthens public integrity and accountability between policymakers, government, companies, and citizens through the use of evidence that is generated from open data of either maladministration, governance gaps or blatant corruption. While a significant amount of important and useful government data remains inaccessible, there are examples of governments taking a stance to support open data initiatives.

Corruption also tends to group around specific themes that open data must address, such as bribery, corrupt insider fraud, undeclared conflicts of interest and improper use of public funds and lobbying abuses. When these are mapped and linked to sectors, at a minimum, the following datasets should be made open:

Open data allows additional individuals to analyze the data and interpret and validate the findings in numerous ways. This reduces the risks that organizations may publish findings or results that used questionable analytical approaches or failed to reveal major biases. A McKinsey report on the benefits of open data stated that open data has three value levers namely: decision making, innovation and accountability. It also highlighted the fact that open data value levers benefit a wide range of stakeholders, and a single open-data initiative has the ability to empower governments, the private sector and NGOs but derive different value depending on the use and the interpretation of the data.

Incorrect use of data and missing data

When using open data, proper consideration of data collection methods and metadata is necessary. When these are misunderstood, erroneous conclusions may be drawn from data.

Statistical inferences and data imputation can also present risks when trying to account for missing data. Data can be used or analyzed incorrectly when users don’t pay close attention to the metadata. While the interpretation of data is a positive from an accountability perspective, the negative is that people can also apply open-sourced models or analytical code to datasets incorrectly or misuse or misinterpret the data models.

Data, whether open or proprietary, is regulated by laws that aim to protect the rights of individuals and guard against malicious use of data. The passage of the EU’s General Data Protection Regulation (GDPR) marked the first enforceable legislation on data privacy. GDPR has been touted as the most significant regulatory development in information policy, influencing the establishment of data privacy policies in other territories. In the United States, the passage of the California Consumer Privacy Act (CCPA) provided similar protections. The Organization for Economic Co-operation and Development (OECD) also provides eight dimensions of data accountability to consider when thinking about privacy protection and transborder flows of personal data. These pieces of legislation and guidelines underscore the importance of consent, and the GDPR specifically requires consent be valid, freely given, specific, informed and active.

Consent should include provisions for users to provide permission for both access and management of their data, as well as the ability to revoke such consent.

Attention must be paid to correctly de-identifying and anonymizing data that is collected from individuals. For vulnerable populations, adherence to regulations governing data dissemination is especially critical.

The mosaic effect is a term used when discussing confidentiality. It is derived from the mosaic theory of intelligence gathering, in which disparate pieces of information become significant when combined with other types of information. Applied to data in the MERL sector, this occurs when multiple datasets are linked to reveal new information. Even if data is appropriately anonymized, and efforts are made to remove personal identifiers, if there are multiple datasets containing similar or complementary information, it’s possible to determine identity based on the various data combined across the datasets such as gender, location, educational status, etc. Resources are now available to help MERL practitioners think about how their data may contain certain linkages or risks which may require additional levels of security or anonymization. Figure 2 displays an example of how identity theft can occur when the mosaic effect takes place. 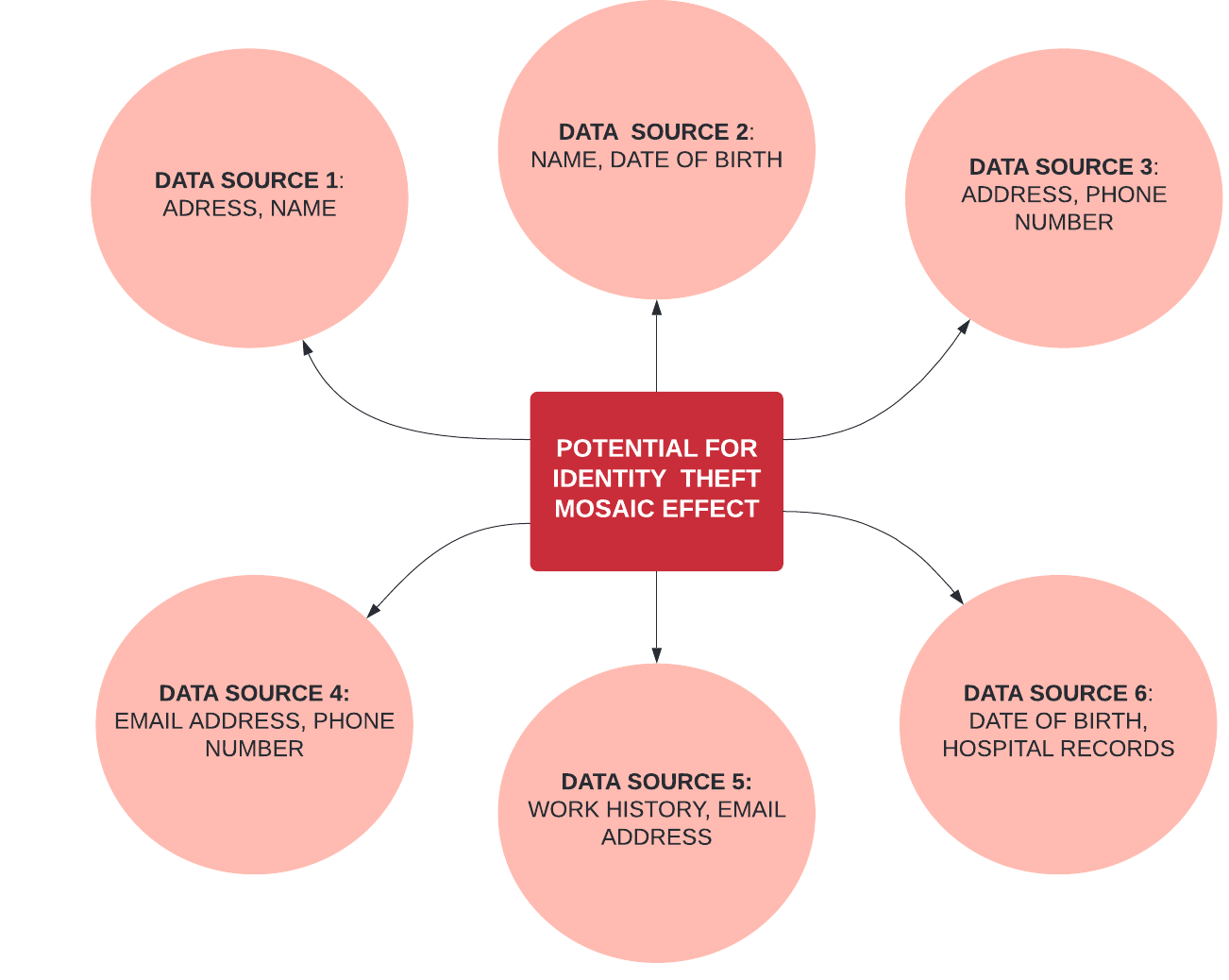 Open data has been described as a public good. While the data is offered for free, there is usually a huge cost for the organization implementing the open data initiative. According to recent literature, beginning costs of open data initiatives vary from €20,000 to €100,000 per organization. Startup costs are also followed by adaptation costs, infrastructural costs, and maintenance/operational costs. Costs associated with M&E projects vary widely as well, costing anywhere from 3% to 10% of program budgets. For many NGOs or organizations interested in open data for M&E, these costs are out of range.

These pros and cons outlined above should be considered and discussed as organizations see to either make their data open or utilize open data collected through other sources. Progress has been made to address some of the challenges, but more work is needed.