With edits from Amy Sample Ward and Nicolas Dickinson

This case study will cover a collaboration by Fordham Law School, UN-GLOBE and Mala Kumar, who is the author of this case study. It will examine the MERL challenges of a crowdsourcing tool that was designed to help lesbian, gay, bisexual, transgender, queer, and intersex (LGBTQI+) United Nations (UN) staff, consultants, and interns determine if a particular UN job meets their safety, family, and professional needs. The case study will outline how open source tools and practices could have addressed several of the main MERL challenges.

Readers who will find this case study useful include:

By the end of the case study, readers should be able to walk away with an understanding of how open source solutions might have addressed key MERL challenges of a tool that would have addressed a major problem faced by LGBTQI+ UN staff.

Accepting a UN job can be particularly challenging for LGBTQI+ staff, consultants, and interns (hereafter referred to as “staff”) when the majority are based in countries that criminalize homosexual activity. The below chart shows the status of criminalized homosexual activity globally as of December 2016.

While many INGOs and government foreign services fully advocate for their LGBTQI+ staff, the UN must reach consensus among member states to follow suit. Because the UN does not formally recognize LGBTQI+ staff as a protected class of people, most UN entities do not have specific policies to ensure LGBTQI+ staff are safe, can openly work with local governments and organizations, and can have their families accompany them to family duty stations.

A lack of formal protections and the closed culture of many UN offices places many LGBTQI+ staff in dangerous situations, adds undue mental health stress, and hinders the career path of LGBTQI+ staff, especially those who wish to have a family. These can be further complicated due to an LGBTQI+ staff member’s race, citizenship, religion, socioeconomic class, and native language, among other factors.

A common example is if the wife of an opposite-sex couple is posted to a country that is a family duty station - an office in a place where UN staff are allowed to live with their family - that does not recognize same-sex marriage. In her case, her husband and kids are allowed to live with her, her husband would be allowed to work and both she and her husband would be recognized as their children’s legal guardians. For same-sex couples, the partner of the UN staff member might be forced to live on a domestic servant visa that does not allow them to work, their marriage might not be recognized, and only the UN staff member might be recognized as the children’s legal guardians. Unless the country office is willing to advocate for the same-sex couple - and many are not - the benefits allotted to family duty station are unevenly realized for many LGBTQI+ UN staff, some of whom choose to leave the system.

Another common example is when an LGBTQI+ staff member works in a country that criminalizes homosexuality and attempts to associate with gay or lesbian communities, publicly expresses affection for a significant other, or advocates for local LGBTQI+ organizations. While these may be considered “normal” behaviors in their home country, these expressions may result in arrest, harassment, or, in extreme cases, assault. Many UN offices are unclear if this staff member would be provided assistance and would be allowed to keep their job if “caught”. Research shows these scenarios makes LGBTQI+ UN staff feel as though they have to choose between their career and expressing their identity in any form.

UN-GLOBE is an organization within the United Nations system that advocates for fairer, more equitable policies on behalf of LGBTQI+ UN staff. With Fordham Law School and the author of this case study, UN-GLOBE partnered on a project to increase visibility of the problem and to help LGBTQI+ UN staff make more informed decisions on which UN jobs to accept, as the UN does not provide any formal tools or processes.

The project had three outputs:

The main purpose of the platform was to help UN staff make an informed decision on accepting a new post in a certain country, agency, or context. The platform was designed to crowdsource experiences, strategies and information on how to navigate different contexts from current and former LGBTQI+ UN staff through “sentiment reports” and through surveys.

Sentiment reports were meant to be open-ended prompts that respondents could use to describe how they felt in a particular UN job and/or give a bird’s eye view of their experience with a particular UN organization, such as UNICEF, the Secretariat, or WFP. The design originally called for “incident reports”, wherein contributors could describe specific discriminatory or hateful events, or transgressions due to their LGBTQI+ identity. However, project research indicated that a more accurate reflection of contributor experiences required less event-specific feedback, and focused more on how respondents generally felt, were treated, could interact, or otherwise experienced their work.

Surveys were designed to be set questions respondents could answer to give quantitative measures of experiences. There were four sets of questions related to workplace culture, career advancement, family and personal relationships, and local cultural and political situations. With no dedicated budget, the platform was not taken past the prototyping stage; however, questions for each of the categories were determined and thoroughly tested with respondents that fell into several user personas. 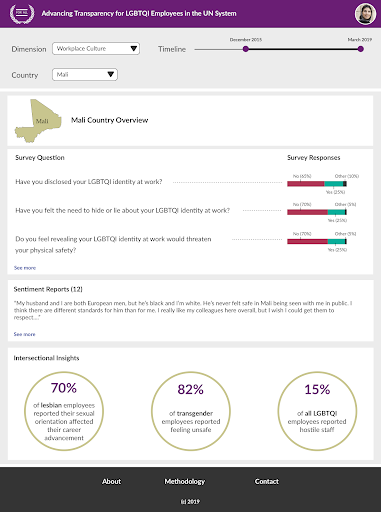 The cost barrier to launch the platform was prohibitively expensive for several reasons, many of which had a strong MERL component. Ultimately the platform did not make it out of the design phase due to limited funding; external donors generally felt it was the responsibility of the UN to assume the costs and institutional UN funding was not secured.

Below are some of the major MERL challenges with the platform.

The biggest design challenge was balancing the level of response aggregation needed for privacy with being useful. Aggregating all data in one country across all agencies across all time would not only not help an LGBTQI+ UN staff decide whether to accept their post/consultancy, it might be harmful.

For example, suppose the majority of responses for a particular country office were from cisgender gay male staff who said the environment is accepting. If the two demographic characteristics - cisgender and man - were not displayed, the platform could be misleading for a gay trans woman staff trying to decide whether to accept a post in that office. Given the sensitive information being collected, however, a high level of data aggregation would be needed to display responses without potentially serious repercussions. The project guesstimated several hundred responses per country office per UN organization would be needed to display at least two disaggregations.

Double or multiple disaggregations is a challenge with data collection in the UN system more generally, such as in representative country household surveys. The amount of information gathered is enormous and must be geographically representative, which makes collection expensive. The platform design hoped to navigate around this challenge by crowdsourcing. However, in only considering proprietary solutions, the amount of funding needed required to implement and deploy the platform was prohibitively expensive.

Another major MERL challenge was developing a unifying taxonomy of key terms. Though every industry has its own jargon, the UN system is particularly notorious for creating its own terms within international development and humanitarian response. Many of these terms are human resources and/or organizational terms that could have significant bearing on experience of LGBTQI+ UN staff. In fact, terminology about the UN was one of the primary reasons the platform was limited to only UN staff contributors.

One example was how to classify the word “consultant” in the UN system. Consultants in most organizations in the United States are hired for one-off tasks, short-term projects, or advisory services. They’re not a core part of the organization’s work, are treated as autonomous to the organization, and often don’t sit on-site consistently. However, the UN does not have to follow American labor laws and “consultants” are often full-time, on-site, and do the core of the organization’s work. Since they are not given benefits, contracts for longer than 11 months, and have no discernable career path, LGBTQI+ consultants’ lack of job security could heavily influence how they were treated and what they were willing to report into a crowdsourcing platform.

Many of the MERL challenges listed above could have been addressed in a cost-effective manner through the use of open source solutions. Below are examples of specific tools that could be explored if other individuals or groups are interested in reprising the work.

One aspect of the platform that was missing in the original design is a community building effort. There are many open source tools available that can be integrated into a platform to act as a free direct message or community comment discussion boards. It’s important to note that given the sensitive nature of the platform and the ever-present existence of online bullying and harassment, any direct message or community commenting feature would need strict governance rules and an active community to moderate. This would be a feature to build in a later iteration.

While the intent of the platform was important and the problem statement clearly laid out, there was a missed opportunity to take advantage of open source tools in the design to navigate around the major MERL challenges and funding constraints. Open source software could have enabled the platform to use the rich information already collected from project interviews and increased data points without significant additional effort. Though the original momentum of the project has lapsed, there is opportunity to carry the important initiative forward.

For more information or if you are interested in reprising the work, please email the MERL Center.